[l1]A[/l1]nother lifelong friendship sprouted in Seth Godin’s online network—who could resist a guy with a medical degree who loves WWII aircraft despite his abhorrence of war, and who writes like this about music and musicians? Meet Rick Wilson:

When I was 13 years old, Count Basie chatted with me during an entire break between sets at one of his gigs. Me, just a kid at the time, when he could have spent that time in any way he wanted to! And as if that wasn’t enough, his 2nd alto sax man at the time, Curt Pegler, talked shop with me (an alto player myself) all during the next break!

I was so lucky that my parents took me to see so many of these Big Bands while their original band leaders were alive and well. Maynard Ferguson, Woody Herman, Benny Goodman; Stan Kenton on the Art Museum steps- little knowing that someday I’d live my dental career just scant yards from there! Sonny Payne with his insanely fancy drumstick maneuverings; I even saw Gene Krupa once! My Dad is a jazz drummer still, and Krupa was always his favorite. They had met and talked once and Gene recognized my Dad and called him by name, speaking to us at our table for a few minutes. Ella Fitzgerald- I saw her in college, and I admit it she made me cry with joy, she was so wonderful.

Basie was always my favorite though, and I saw him twice. The first time I was younger, maybe 11, and my signature memory besides the gorgeous and fascinating music was smoke in my eyes. Not the sultry old standard “Smoke Gets in my Eyes”, but the real, airway-burning, eye-ripping carcinogenic effluent from too many cigarettes in a crowded room. The second time, my Dad and I caught him at, I believe, the old Covered Wagon Inn. All these years later I recall the room precisely and can hark back and picture Curt and I chatting at the corner of the bar. (Were they more lax about kids, accompanied by their parents, being in proximity with alcohol in those days? I dunno.)

Basie taught me so much. First, the man had incredible “chops”- the basic set of musical skills a musician possesses, particularly in jazz. He could shed arpeggios with blinding speed. I’ve heard him do it, it’s amazing. And yet he often started a piece or took a solo with just a few spare notes. Why did he forego musical density for minimalism so often? I’m not sure what was in his mind, but I have my theory. He may have only played a few notes, but they were excellent notes. They mattered. Basie also understood that the spaces between the notes were just as important, if not more so, than the notes themselves. There’s a lesson in human communication! He also left us wanting more. That was part of why he was so successful for his entire career; in short, he was always cool. Never jumped the shark…

(There’s more below the image.) 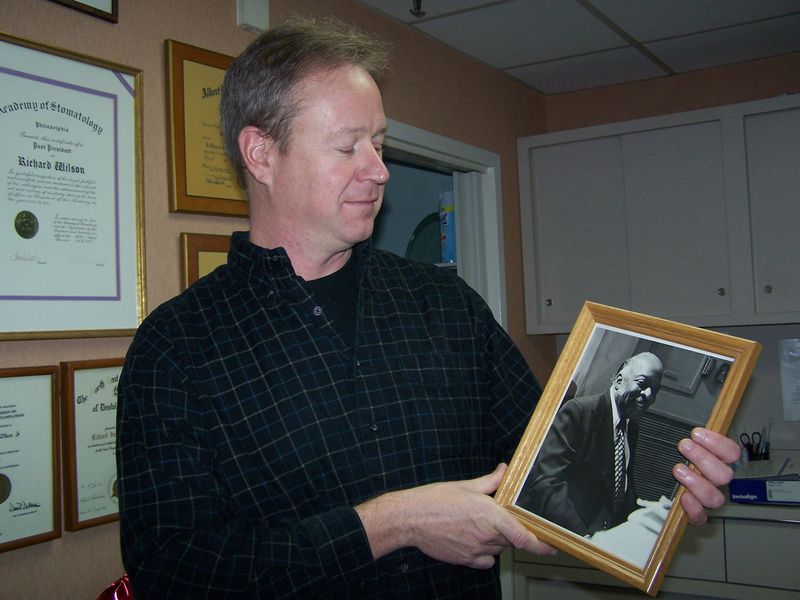 Imagine my elation when I got to Muhlenberg College and found that our band director, Barry Kolman, was also into Basie. Every concert contained at least one chart, sometimes two. In fact I can quote Dr. Kolman precisely: “If you can understand Basie, you can understand the rest ot jazz.” And it was true.

My most important and valuable lessons learned from Basie are not about music, however, but concern intolerance. The thing is, William “Count” Basie was born in 1904, a time of open and raw intolerance in this country. I wish at age 13 I could have had the understanding to ask him about his response to the intolerance he saw around him, but I believe that I know the essence of it. Faced with something monstrous that he could not control, he chose to influence it- and also to control his own reactions to it. What I mean is, in his gentle and yet relentlessly consistent way, he broke down barriers long before the more famous musicians and athletes of a later generation. Basie was an outlier– in Malcolm Gladwell’s definition from the book of the same name. Outliers are defined by Gladwell as people who do not fit into our normal understanding of achievement; exceptional people, especially those who are smart, rich, and successful, and those who operate at the extreme outer edge of what is statistically possible.

What I want to say to a later generation of listeners who may not be familiar with Count Basie’s music is this: you can hear in the music itself that the man is an outlier. You can hear that he was remarkable and interested in doing things the way he felt, not the way that someone told him to. And, most importantly, you can hear Basie’s essential optimism. It runs through every note. That irrepressible mid-20th Century American optimism that may be gone now. A recognition that things may not be perfect, but that they for darn sure are going to keep getting better, and this man’s job is to contribute something positive to that goal with his music and his actions and his life.

And, in a classic and memorable example of doing just that, one person at a time: by talking to a 13 year old kid and signing a photograph to him: “To Rick, Basie ’74”.

The book Hits or Niches was my first collaboration with Rick. I hope ever so much that it’s not our last.